It would be reasonable to call the term two holidays a ‘sports break’, with the soccer and cycling dominating television screens and resulting in some very late nights! Carla Temple tells us a bit about the Tour de France, including a game to get kids engaged in the race. 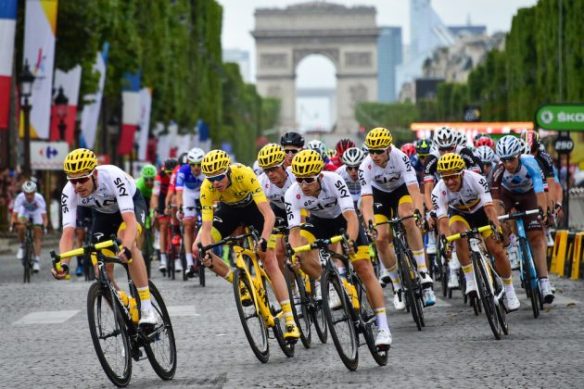 On 1 July 1903, sixty pioneers set out on their bicycles for the first ever Tour de France. After six mammoth stages (Nantes – Paris, 471 km!), only 21 “routiers”, led by Maurice Garin, arrived at the end of this first epic. Having provoked a mixture of astonishment and admiration, le Tour soon won over the sporting public and the roadside crowds swelled. The French people took to their hearts this unusual event which placed their towns and their countryside in the global spotlight. END_OF_DOCUMENT_TOKEN_TO_BE_REPLACED

Thank you to Madame Payne for her interview with KPS French Language Assistant, Mégane Lesuisse.

Madame Payne: You arrived at KPS to commence your French Language Assistant position at the start of this year. What motivated you to apply for the position?
Mégane: Australia has always been a dream for me since my early childhood. After finishing my master’s degree in English Linguistics and Language Acquisition, I wanted a gap year to fulfil this ever-present dream. Combining this traveling dream with my passion for teaching was just the perfect opportunity for me. I applied with little hope as there were only 11 positions available, but here I am! Lucky to be working in such a good school. END_OF_DOCUMENT_TOKEN_TO_BE_REPLACED

Many thanks to Madame Temple for this week’s post about a special day held at school last week.

On Wednesday 25th November we had a whole school French day with a puppet theatre incursion and dress-up. The school yard looked very colourful with the French colours bleu, blanc and rouge, and many students dressed as characters from Cinderella. END_OF_DOCUMENT_TOKEN_TO_BE_REPLACED