Before their primary school years draw to a close, the Year Six students participate in a bunch of exciting activities, one of which is the Canberra camp. Thank you to Year Six students for sharing the highlights of their trip. END_OF_DOCUMENT_TOKEN_TO_BE_REPLACED

Thank you to Year 3 student, Ted, for his report on the middle school excursion to the city.

On the ninth of May we went on an excursion to the city to look at the impenetrable structures the city has come to show. What are they and some information you ask? I’ll tell you! END_OF_DOCUMENT_TOKEN_TO_BE_REPLACED

When my eldest child was in Prep, his class was learning about the ‘olden days’. Deciding to show his classmates a true artefact from the olden days, my son took my typewriter to school. After answering questions about how old I was and whether there was electricity when I was growing up (!), the kids all had a turn on the typewriter. Needless to say, the satisfaction of typewriter keys hitting the paper, the ‘ding’ of the return, and rolling a fresh page in to the machine, is timeless.

Thank you to the Junior School team for this week’s look at what our youngest students are learning about technology.

This term the Junior School students and teachers have been having lots of fun looking into old, current and new technologies. This is all part of our new Inquiry unit, ‘Back to the Future’, exploring the central idea that technology gives us clues into the past and future. This unit will culminate in a ‘Shark Tank’ style of presentation, whereby students will be tasked to design a piece of technology for the future and present their idea to a panel of teachers, parents and their peers for assessment. END_OF_DOCUMENT_TOKEN_TO_BE_REPLACED

Thank you to Anastasia, Riley, Arya and Anja for their reports on the Year 5 excursion to the National Gallery of Victoria.

On the 29th of May, all the grade fives went to the NGV to check out Frontier Wars, which was a self-guided tour. In Frontier Wars, we looked at a lot of the traditional aboriginal artworks. We discussed the meaning of each piece of art.

After the self-guided tour in the NGV an expert took us on a tour around a timeline exhibit. The timeline went from when the Aboriginals peacefully lived in Australia for 50,000 years, until 1856 when the State Library opened, which was the first public and free library – the only condition was that you had to be eighteen or over and they had to see your hands to make sure they weren’t dirty. END_OF_DOCUMENT_TOKEN_TO_BE_REPLACED

As a parent, I always think the sign of a thoroughly enjoyed camp is how early the kids go to bed on their first night home. My Year 6’er set a new record after Canberra – he bypassed dinner and was tucked in by 7pm!

Thank you to Year 6 teacher, Chris Athanasiadis, for this week’s post about the Year 6 camp to Canberra.

END_OF_DOCUMENT_TOKEN_TO_BE_REPLACED

Thank you to Sophie Apperly for this week’s post about the Junior School excursion to the SEA LIFE Melbourne Aquarium. 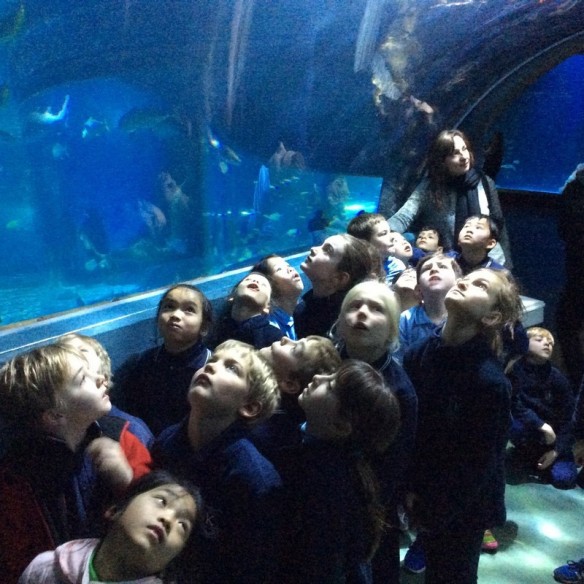 As part of the Junior School’s Geography Inquiry Unit – “Oh, the Places You’ll Go!” the Year 1 and Year 2 students ventured into the city for lunch by the Yarra at Batman Park and then to the ‘Save our Seas’ program at the SEA LIFE Melbourne Aquarium. END_OF_DOCUMENT_TOKEN_TO_BE_REPLACED

Although the weather wasn’t as kind as it has been for previous camps, it didn’t stop our Year 5s from enjoying all sorts of outdoor activities at Camp Manyung in Mount Eliza. Some of the students share their experience –

On the 23rd of November, 2016, the Grade 5 children, teachers and some parents went to Camp Manyung in Mount Eliza. END_OF_DOCUMENT_TOKEN_TO_BE_REPLACED

Thank you to Year 6 students, Taiyo, Eddie and Max for their thoughts on their final year at Kew Primary and some of the things that have changed at the school since they started Prep.

As the end of the year draws closer, there have been many fun times that we have experienced at Kew. Such as a Canberra camp, the Eureka Tower and much, much more. More importantly, that best part of year 6 is definitely the jumpers; because it is student-designed and it’s also very competitive due to many issues such as popularity and ones that are actually well-drawn! The jumpers are a really useful in the winter and to identify us as Year 6. END_OF_DOCUMENT_TOKEN_TO_BE_REPLACED

The Year 3/4 classes visited the Royal Botanic Gardens last week (thankfully it was the one gloriously sunny day in the middle of an otherwise wet, cold week). When I asked my Year 3 daughter what she thought they’d be doing on the excursion she went into great detail describing the scientific drawings they’d been practicing. And I had to say that I was a bit jealous because when I was at (high) school, one of my favourite things in biology were the species transects and quadrants we’d do on field-trips – in year 3/4 terms, it’s a ‘bug census’. However, whether you’re in Year 3/4 or 11/12, the principle is the same – a defined space, paper and pencil, magnifying glass and observant eyes!

I always enjoyed the exercise because I liked the sorting, taxonomy and list making. My daughter said that she was “…leaving the counting to someone else…” and instead was going to “…spend the day drawing bugs….”. Either way, it sounded like the best day.

Indi, Ishana and Emma from 3/4J tell us a bit more about the excursion –

On October 6th Year 3/4s went on an excursion to the Royal Botanic Gardens. END_OF_DOCUMENT_TOKEN_TO_BE_REPLACED