Thank you to Moritz of 5AB for this comprehensive softball report!

After the Kew Primary softball mixed team easily won the district competition, we had to wait a long time for the next stage which was division. After some last minute practice sessions before school, on Tuesday the 16th of October we finally went to division at Myrtle Park. We went up against three other schools, Ashburton Primary, Greythorn Primary and Balwyn Primary for a place at Regionals. Division was a bit more difficult because there were more rules that we weren’t used to playing by, for example, stealing bases.

Our first match was against Ashburton. They had an amazing pitcher that got numerous players out which took us by surprise. Unfortunately, we got beaten and we didn’t even score a single run! In the second match we played Balwyn Primary, and lost by a small margin. This time we were more prepared in what to expect from the opposition. They had excellent teamwork and fielding which got many of our players out. They also had a great positive attitude and was cheering everyone including our team on. Next, we played against Greythorn Primary and we started off well but towards the end we started getting tired and dropping catches. At the end though Alex and Moritz (if I can say so myself) made an amazing double play by getting two people out off one pitch.

The softball team this year compromised of many talented students who all should be very proud of how far they’ve come individually and as a team. Alex was amazing at pitching on the day, Aston also was amazing when Alex didn’t feel like pitching. Well done to Jack Li and Gabe for doing amazing throws. Thanks to Bruce for stepping in for Moritz when he didn’t want to catch. Well done Moritz for catching and tagging a lot of runners out. Congratulations to Inigo for catching people stealing basses. Derick was awesome at tagging people out at third base and throwing the ball quickly. Bao was an amazing hitter and hit the ball numerous times.

Thanks to Courtney for stepping in as coach for the day and thanks to Tash for coaching us throughout district. 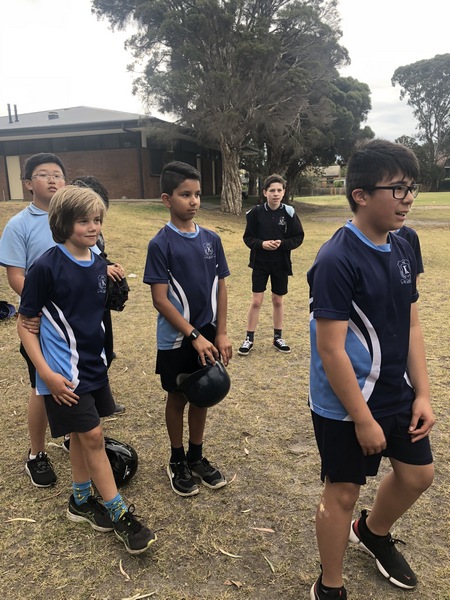 1 thought on “Playing in the big league!”