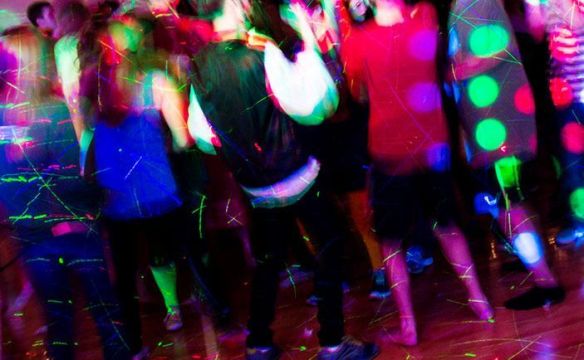 “You make me feel like dancing… wanna dance the afternoon away….”

Okay, that’s not quite how the song goes but when you’re six-years-old, you’re not exactly hitting the tiles at 2am. Instead, KPS students converged on the hall last Friday night for the annual school disco.

A lot may have changed over the years but school dances stay the same – the excitement, the energy (brought about by loud music and red cordial) and kids showing off the moves they’ve been practicing in the privacy of their bedroom.

My earliest memories of dancing begin when I was in Prep – my carefully planned sixth birthday party was destroyed when I came down with the mumps. I was devastated but cheered up when I was presented with a copy of ABBA’s Arrival. While I may have lost points on the Prep social scene by cancelling my party, I made up ground by inviting people over after school to listen to Arrival. Within weeks, we had carefully choreographed routines to Money, Money, Money; Knowing Me Knowing You; and, of course, Dancing Queen.

When I turned nine, I had a disco party. We played 1981 Over the Top and my guests took it in turns to stand on our brown vinyl pouffe to belt out Olivia Newton John’s Physical and Kim Wilde’s Chequered Love. Looking back, the pouffe was our introduction to the concept of a podium and Physical was wildly inappropriate for nine-year-olds. Hey, it was the eighties.

Fast forward to grade six when my primary school years finished with the much-anticipated Grade 6 Dance. My memories of the night (I mean afternoon) are dominated by kids attempting head spins and ‘the worm’, and Hits Huge ’84 playing on the ghetto blaster. Like a scene from a movie, we finished the night arm-in-arm singing Wham’s Wake Me Up Before You Go Go.

Which made me wonder, when our kids are middle-aged, what will they remember about dancing at school discos? Year 5 student, Damon, shared his thoughts on last week’s School Disco –

It’s been a long week at Kew Primary with excursions, incursions and our final week of Kewriosity. Kew could really use a dance to sing, catch up with friends and let our grooves run wild. Oh wait! The Kew Primary School disco was on.

On Friday 17th June, kids from Prep to Year 6 had the chance to boogie. With Preps and Year 2 dancing from 5pm-6.15pm and Years 3-6 from 6.45pm-8pm. With help from an over-the-top DJ, Kew kids could play around, have a sing and a dance but most importantly, have a great time. The DJ encouraged kids to have a dance and always have fun.

Did I mention that you could have a go singing on the mic? With the mic you could sing your favourite songs from Ex’s and Oh’s by Ellie King and Drag Me Down by One Direction to Sorry by Justin Bieber. The DJ also got students involved in a dance-off. Shawn Mendes finished the night with Stitches and after that it was over. I encourage everyone to go next year.