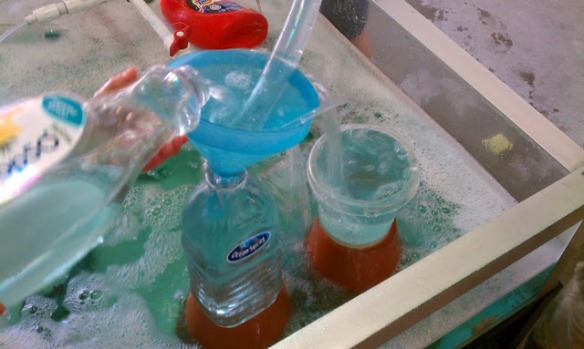 During the time that I was involved with the committee that managed kindergartens in Kew, we made a change to the meeting structure. Instead of holding meetings at the Association President’s kindergarten, we rotated them between the five Kew kinders – because everyone likes a sticky-beak. It was great to see what other kinders were doing with their space and pinch the odd idea. After all, imitation is the sincerest form of flattery.

I was reminded of this ‘approach to flattery’ during the holidays when my family visited Whittfield, a tiny town in Victoria’s King Valley. Whittfield Primary School was next door to where we were staying and the kids headed there to make use of the school’s extremely lush oval (“With goal posts at both ends, Mum!”). While the kids kicked the footy, I took in my surrounds. Wow! As well as a superb kitchen garden, the school had what appeared to be an outdoor science lab – a compact but well set up undercover area, secured by clear plastic roller doors on each side and complete with taps, sinks and benches at the right height for children to stand at. It was a simple, accessible space and one that would be enormously useful for all sorts of messy activities.

I was a bit jealous – I’d like something like that for KPS. That thought, combined with the appeal from the Building & Grounds sub-committee in last week’s newsletter for parents and carers to help with some specific projects, got me thinking about wish lists.

Wish lists are rarely realistic and are usually long and filled with wildly expensive items (which is why they are fun to write). However, wish lists are also useful tools for driving planning, seeking grants, fundraising and thinking about new or different opportunities. They really help you to ‘think big’. With this in mind, I asked Patricia Incerti’s Grade 3 class to create a wish list for the school. No idea was a ‘bad idea’ and the list that they gave me is brilliant (I couldn’t leave any of their fabulous suggestions out) –

Phew! Aren’t there some terrific ideas on their wish list? (Just quietly, I’d also love a butler… A mirror ball would be nice… And a panda at KPS would certainly be a draw-card).

A group of Grade 6 students are taking a more formal approach to the ‘wish list’ through a project called ‘Play for Life’. What they’re doing is really interesting, and while there may not be butlers, pandas, mine carts and caves in the plan, they are looking at all sorts of opportunities to enhance play. I’ll share more about Play for Life later this term.

In the meantime, consider turning wish lists into reality by helping out the Building & Grounds sub-committee.