(With thanks to Enid Blyton)

About a month ago I had to pop in to school for something during the day. As I walked up Pakington Street I heard the kids laughing and carrying-on over the other side of the fence. As I got closer, I realised the sound was coming from the new sand-pit and when I looked through the fence I saw the entire area was covered in blue. You could not see the sand for the kids!

Later that week the Grade Fives launched a petition to demand a bigger slice of time in the sand-pit. They got a lot of signatures (including one that looked suspiciously like ‘Mr Archibald’) and submitted their petition to Assistant Principal, Ms Grace. Ms Grace, recognising the depth of feeling about the new sand-pit, duly changed the roster to ensure the older kids got more time.

About a week after this I was with George Radcliffe-Smith – the President of the Parent Teacher Association – helping set up the new Prep parents’ welcome evening. I took George aside for a moment and led her to the classroom window that looked out onto the sand-pit. It was after school, but once again the sand-pit was full of kids having a blast. ‘Nice job, George,’ I said.

George growled and grumbled at me under her breath in a way that’s instantly recognisable to anyone who knows her. She doesn’t like taking credit, and she doesn’t like people making a fuss. Oh well, George. Yah boo sucks to that!

George became involved with the PTA as soon as she arrived at Kew Primary back in 2008 and became President at the start of 2011. She would say we got the sand-pit because dozens of different people – over many months – gave up their time and worked really hard to raise enough money to fund it, and she would be right. A huge team of enthusiastic parents cooked sausages, wrapped presents, poured drinks, made salads, sold tickets, advertised events and cleaned up afterwards to make it happen. But all that needs someone to coordinate, organise and agitate, and that someone was George. 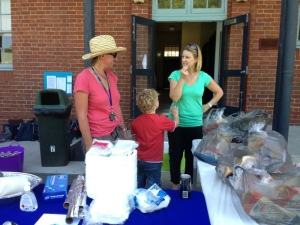 So George, on behalf of the Kew Primary School community, thank-you for the fantastic contribution you have made to our school; for your time and effort and enthusiasm and your unique style of leadership. We wish you all the best with your move to Tassie and look forward to your dropping by for a catch up now and again. (No blubbing, George – you’re from the country, remember – and no rude words – you’re the wife of a Principal now!).

‘Hurrah for George and thanks awfully!’

1 thought on “Hurrah for George!”